SpeedChecker shares their insights on how the new AWS and Azure data centers in the Middle East have contributed to reducing latency and improving the user experience.

In recent years it’s without question that operators in the region are improving the user experience considerably. 5G dominates the industry, focusing both on the investment front as well as on the marketing push. A less sexy topic to boast about is the continuous drive to improve the interconnections which play a major role in improving the user experience as well. Operators, when launching 5G, often accompany marketing messages with speed test app screenshots showcasing 1Gb+ speeds. This indicates the challenge in the industry to find the real use cases for 5G as, surely, the purpose of 5G is not just making speed tests faster.

At SpeedChecker we look beyond measuring fastest 5G speeds: our testing methodologies look at capturing data on the user experience such as video streaming, web browsing or services relying on low latency. One of the topics that we feel does not get enough attention from the industry is the impact of new data centers in the region and how they improve the latencies and, in effect, user experience of many services which are hosted in the region and are latency sensitive.
First Microsoft Azure and then, soon after, Amazon AWS launched new data centres in the Middle East. Azure launched in the United Arab Emirates in June 2019 and AWS launched in Bahrain in July 2019.
Shortly after the launch SpeedChecker evaluated the connections to the new data centers from the Middle East region. The results were not pretty: most of the connections to both Azure in UAE and AWS in Bahrain were not providing low latency links that would improve the quality of experience. With the exception of Bahrain and UAE which interconnected very well, the rest of the countries had latencies to the new datacenters in the Middle East that were similar to those in Europe. This meant that to truly offer great user experience across the region CDNs such as Cloudflare had to be utilized. 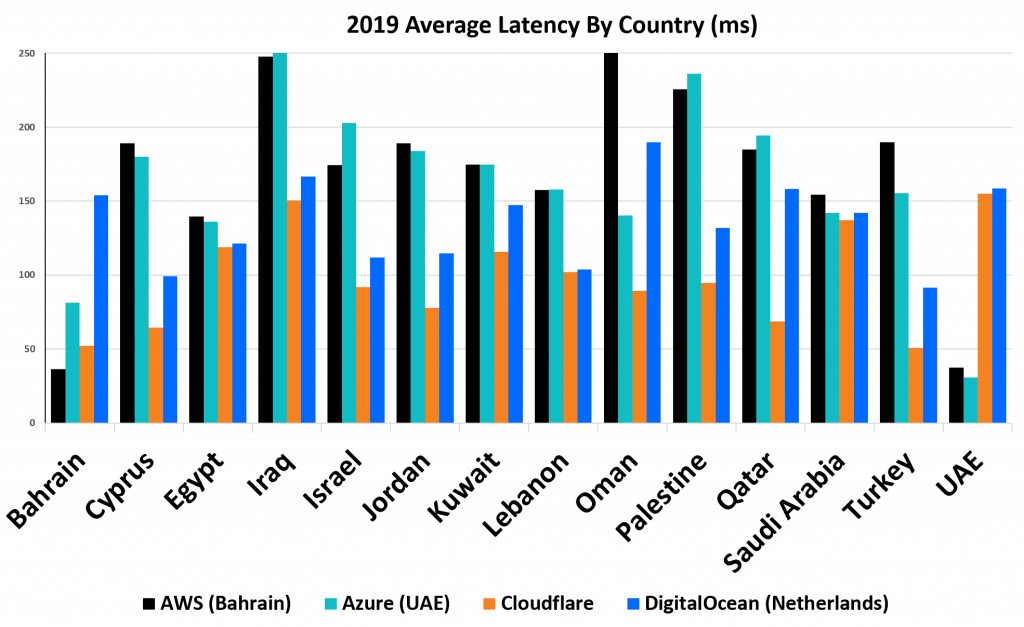 Fortunately, since 2019 the situation has improved considerably for both AWS and Azure clouds. 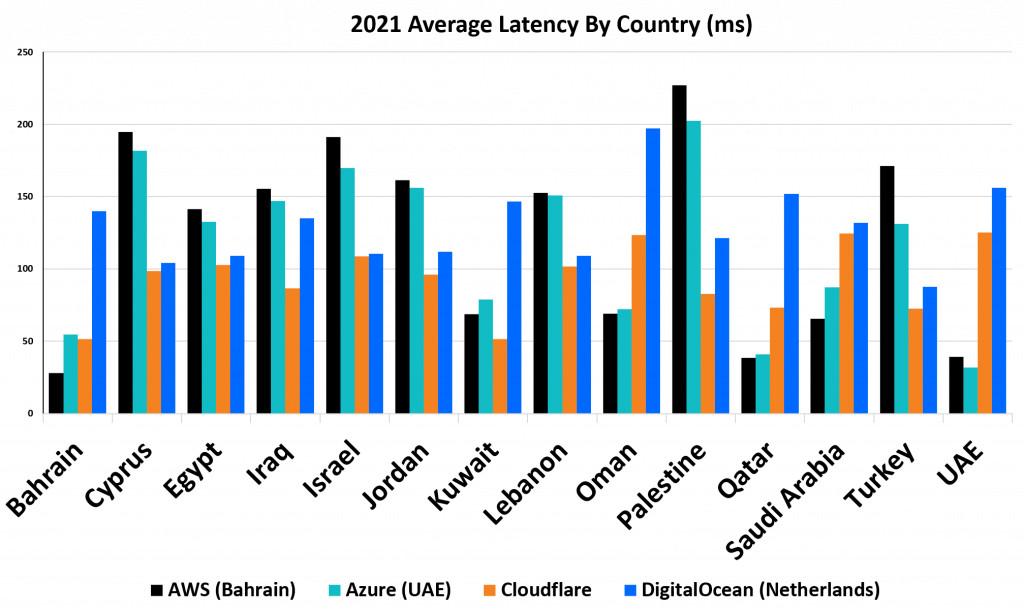 The biggest improvements were experienced for users in Qatar, Kuwait, Oman and Saudi Arabia. The latencies to the new datacenters in UAE and Bahrain from those countries decreased by more than 100%.
Not all users in those countries benefited equally though. Some operators invested heavily in improving the latencies, most notably Ooredoo (in Qatar, Kuwait and Oman), STC (Kuwait and KSA), Omantel and Turkcell.
While there were plenty of improvements for the AWS and Azure datacenters, not much can be said with Cloudflare. Cloudflare, being one of the most popular CDNs in the world, hosting over 10% of websites worldwide did not experience similar gains. Noted, Cloudflare already has one of the best low latency offers in the region but was overtaken in some markets such as KSA, Qatar, UAE, Oman.

The reason being that Cloudflare caches were not deployed to few key operators in the region. While Zain group has been very welcoming with Cloudflare as well as Ooredoo group, bigger MNOs such as STC in KSA or Etisalat have not decided to set up partnerships yet.

As we can see in the charts above, the latencies for countries which do not have local caches are more than twice as slow as countries with a high percentage of cache access. The reason being that users with no local cache access are sent to EU-based datacenters. This is an unfortunate situation in the region as it has a big impact on the user experience. In other regions such as the EU the lack of local CDN cache does not pose a big impact on the user experience as the users who do not have access to local cache can be routed efficiently to neighbouring countries which are geographically not very far and therefore the latency impact is minimal.

The situation in the region has improved considerably since 2019 and it is the new data centers and the partnerships with carriers and operators that have enabled this for the users. The biggest gains were observed with AWS and Azure datacenters which will push more local companies to host with those platforms and enable consumers to have an improved user experience.