In 2019 7 million visitors arrived in Jeddah during Ramadan (5th May to 3rd June) compared to its normal population of between 4 and 5 million. Google’s own insight report shows that demand increases during Ramadan as well. In this report we examine how the MNOs (Mobile Network Operators) coped with this increased demand. We analyse speeds between 17th April through to the 13th June to compare average download speeds before, during and after Ramadan.

Ramadan, Jeddah and the Internet

Internet Use Peaks During Ramadan

Internet use in MENA (Middle East and North Africa) during Ramadan is higher than any other time of the year. Google internal data shows huge spikes across several content categories on YouTube throughout the holy month each year, including TV & Comedy, Cooking & Recipes, Religion & Spirituality, Gaming, Auto & Vehicles and Internet & Telecom. Here is a chart from Google’s report in 2015 showing demand for TV and comedy downloads rising during Ramadan and falling after Ramadan.

This peak is further emphasised in Google’s 2017 Ramadan Insight report in which they show:

We analysed  data before, during and after Ramadan between 17th April and 5th June. This data was restricted to include only data that was:

We chose to limit to cellular because this is the type of connection most likely to be used by visitors as well as local residents and therefore more likely to be impacted.

The top 3 MNOs (STC, Mobily and Zain) were chosen because they account for almost all connections in Jeddah.

We chose evening because we anticipated the demand to be high during those hours. Midday was chosen to compare the quality of service during two different parts of the day with different demands on the Internet.

STC and Mobily achieved the best results with nothing to choose between them. Although Zain achieved lower speeds credit is given for sustaining their performance during this spike in demand. 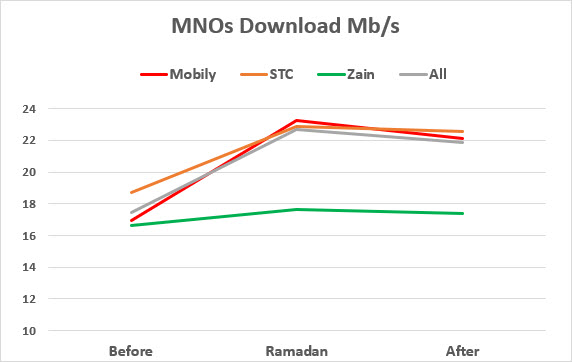 We were also interested to see how performance varied during the day from the quiet of midday to the peak viewing / download time of the evening. Here we see that the speed in the evening was always well below the speeds achieved during the day. Even so, the evening speeds improved by 30% during Ramadan. 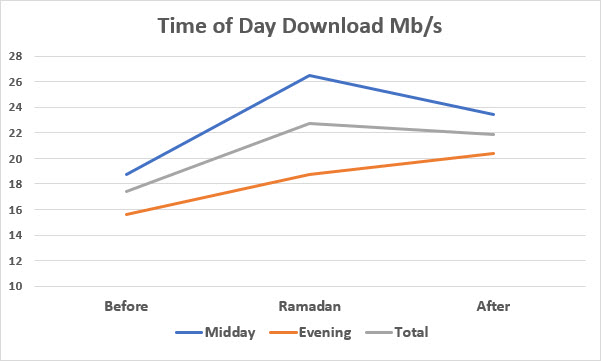 For Hajj last year (2018) the King Salman bin Abdulaziz and the Crown Prince Mohammed bin Salman issued a directive “to do everything possible to make it easy for pilgrims to perform the rituals of Hajj”. The initiative’s objective was to allow pilgrims to communicate with their families and enable them to access the digital services available in the Smart Hajj initiative. This was a great access as seen in our report from last year.

Although we didn’t see any similar initiatives being advertised in Jeddah during Ramadan it appears from our results that efforts have been made by MNOs and the Kingdom to sustain performance during this high demand.

We expected to see that as more and more people arrived in or passed through Jeddah during Ramadan that the speeds achieved would fall and then return to previous levels as the demand diminished. However, all three MNOs achieved remarkable results showing an increase in measured speeds during Ramadan compared to the weeks before. Although there was some reduction in speed after Ramadan it seems to have sustained a higher level than before. As discussed previously, the increased demand for Internet was predicted well in advance giving MNOs ample time to prepare. We can only assume that they used this time wisely and their customers (and guests) reaped the benefit.

It is heartening to see that there seems to be a residual benefit to customers of all three MNOs with the speeds after Ramadan being higher than before (if not quite as high as experienced during Ramadan).

EE Tops the Charts at Glastonbury 2019

The 200,000 festival goers at the 2019 Glastonbury Festival were treated to free 5G via temporary masts installed by EE as it became the UK’s first 5G connected festival. In this report we look at what this meant for the music lovers as they enjoyed the music over 5 days in the English countryside. Did EE customers notice an improvement? How did the other MNOs fare?

EE (owned by BT) have installed 5 temporary masts across the 900 acre (3.5 square kilometres) festival site to broadcast 5G for the first time. The same masts are also providing 2G, 3G and 4G. They have a free 5G-powered Wi-Fi for the 200,000 festival goers to connect to.

In previous years the demand for mobile data during the festival was huge and this year will be even greater. During the previous festival (2017) 54 terabytes of mobile data was used and it is expected that this year it will be 40% higher at 70 terabytes. Possibly higher if the temporary EE 5G network is successful. Research from EE shows that the typical Glastonbury-goer will “watch 16 different performers and post a minimum of 12 videos on social media documenting their experiences at Worthy Farm – resulting in 2.4 million uploaded throughout the weekend”.

The image below is an example of the temporary masts erected by EE at Glastonbury to provide improved 2G/3G/4G service as well as 5G.

We started collecting data when people started to arrive on Wednesday and continued through to Sunday. We concentrated on results in and around Worthy farm and only analysed cellular results. The only residential area was the small village of Pilton (population < 1000) which means that by restricting our analysis to cellular we can be sure that most of the data came from festival goers.

The image below shows the remoteness of the festival and how challenging it can be to provide a good service. The circle shows an approximation of the geographical area covered by our results.

There are many factors that can affect the quality and accuracy of a speed test on a mobile device and we are able to take these into account to grade each result in terms of reliability. For this study we decided to only use the most reliable 2500 taken during the festival.

Our analysis is based on 2500 measurements from 468 unique devices including 145 different models, 23 manufacturers and 4 MNOs taken over the 5 days of the festival. We compare the performance of the MNOs, the devices and also show how performance varied from day to day.

During the festival 4 mobile network operators (MNOs) provided internet to the festival goers with EE, O2 and Three being the most popular. The results show that EE was able to provide nearly twice the average download speed with Vodafone clearly in second place but still very much slower than EE during the festival.

During the festival we collected data from 468 unique devices including 145 different models from 23 different manufacturers. Here are the top 10 fastest phones from our data collection during the Glastonbury Festival. The list is dominated by Samsung models 9 and 10 with the S10 being the best by far. 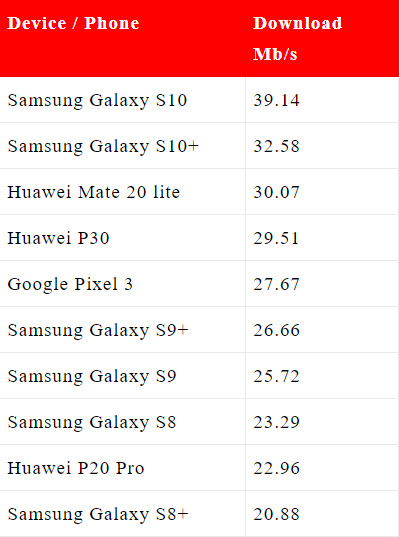 The speeds were quite good on Wednesday when people started to arrive and the final preparations were being. The best day was Thursday, the first full day of the festival and speeds gradually fell away as more people arrived and as the bigger acts appeared. The bigger the act the more videos being uploaded to the Internet and the higher the demand on the services. EE performed particularly well on the final day being twice as fast as its nearest rival, Vodafone. 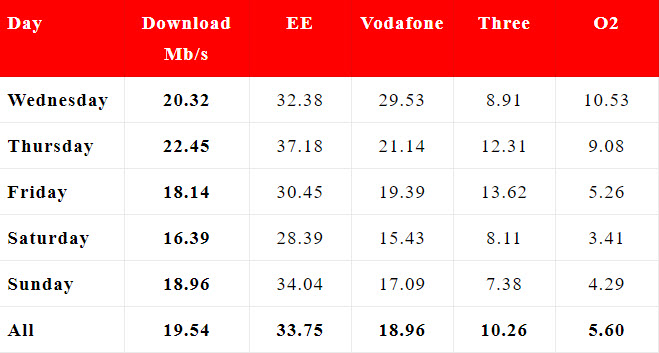 Glastonbury festival goers have enjoyed excellent performance whilst enjoying the music in the English countryside with 30% enjoying download speeds in excess of 20 Mb/s. 20 Mb/s is also the average for all customers which is higher than expected and is due to the nearly 35 Mb/s average achieved by EE customers thanks to the provision of temporary masts by EE. Although these masts supported 5G we saw no 5G devices being used in our crowdsourced data sample of 468 unique devices.

Of course the real winner was music but EE must be very happy with their performance throughout the festival.